Prototype light SPG developed by Vickers. Development started in 1947. However, the prototype was not manufactured until 1950. The design of the SPG was already obsolete by this time, and the project was canceled.

Artillery with only one type of ammunition like a Bishop. Good choice for city maps. Once this artillery was a killer, now it is just a shadow of what it once was. But it can still be used in the game. Good shooting angle, but short range. So you have to play aggressively with this artillery. It's hard to hide from this artillery. It doesn't do much damage, but when the enemy is behind an object, you can choose where to shoot it. Mostly in the engine.

This artillery is intended for firing slow and stationary tanks. It is difficult to shoot targets on the move. This artillery requires knowledge of the map, because you need to get close to the enemy to shoot, while remaining hidden. It is not easy to play this artillery. 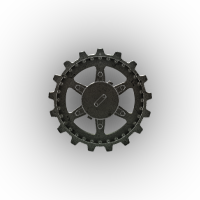 *Numbers are total experience points earned in a battle..